where my girls at?

I’m back with details of a very fun weekend with our first crew of visitors: Mandi, Julie, Caitlin and Lindsey!  The ladies arrived last Friday and stayed three nights with us here in The Hague before heading for the final night of their Grand European Excursion in Amsterdam.

We kick started their stay with some tasty cheese, meat, spreads and bread samples at the Ritz Carlson and a “Proost” to our first visitors! 🙂  Given the evening arrival, night #1 consisted primarily of settling in and, of course, dinner out.  The girls got a little taste of the wind/rain on our way to dinner, but luckily we have an assortment of umbrellas and they were prepared with a few as well. 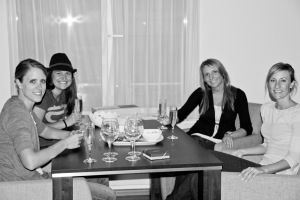 A toast to Holland!

Day #2 was the Den Haag tour, and we had quite the day planned.  I had made a little checklist for each person during their stay: 1. Dutch Foods to Sample, 2.  Landmarks to See, and 3. A Scavenger Hunt.  This was a fun way for them to remember everything they saw/tasted, as well as spot some of the items we see frequently here (such as a bicycle with a wheel barrow on front full of kiddos).  They seemed to enjoy it, and even got a little competitive now and then!

First up, a tour of Bankastraat, which is what we would call our neighborhood stores.  We stopped in the flower shop, grocery store, the butcher and the bakery for goodies.  Next, we ventured to the city center and wandered around the historic sights.  We walked by the Queen’s Working Palace and the Dutch Houses of Parliament, and many photos were taken too!  Then a stop at the Malivield Pannenkoekenhuis for mint tea and Dutch pancakes. 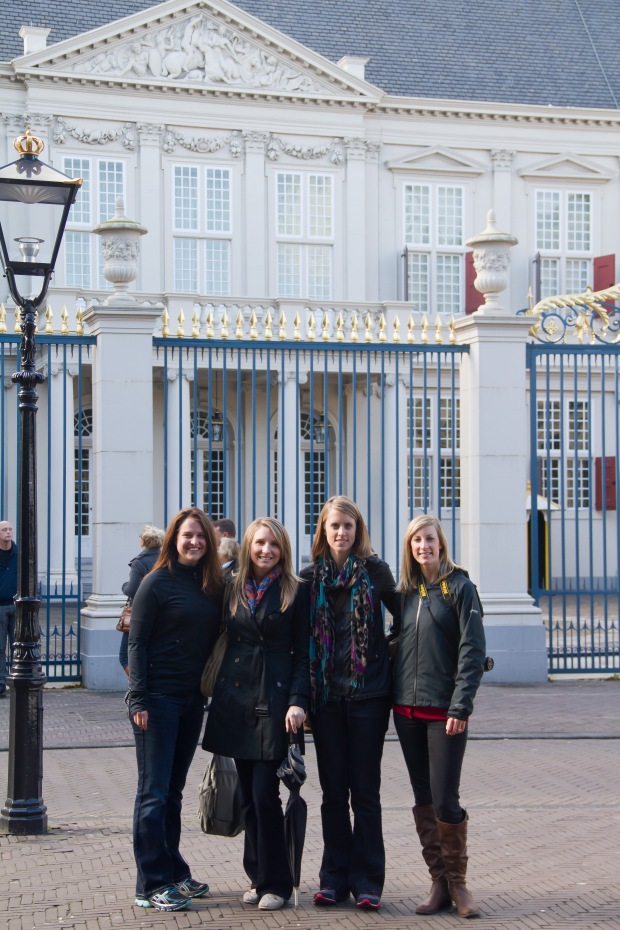 The crew in front of the Paleis Noordeinde. 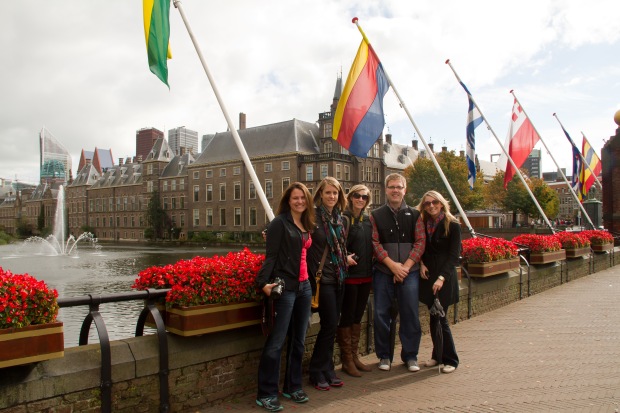 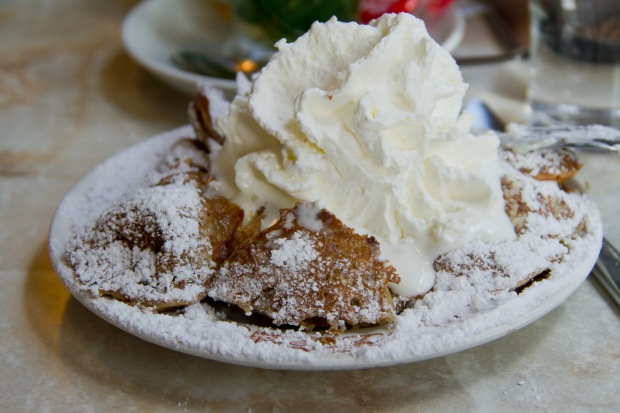 After lunch, we made our way back towards our apartment and also to the nearby Vredespaleis (Peace Palace).  Then we hopped on the tram and headed to Scheveningen (aka – the beach).  We walked the pier, got our toes in the water (ok – only some of us), walked the promenade, and settled in at “Doen”, a restaurant along the South end of the beach.  The meal was delicious and sunset views were quite spectacular as well!

On the pier at the beach.

Julz getting her feat wet! 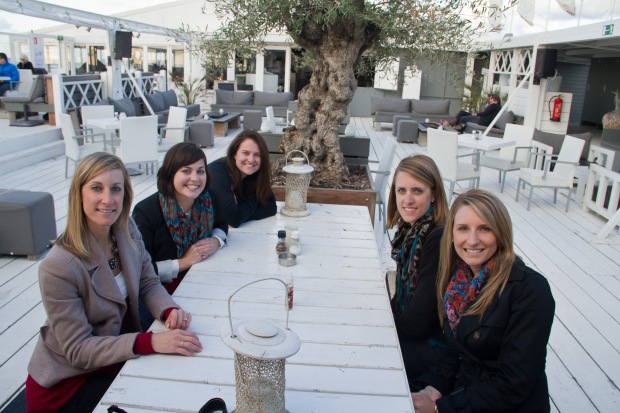 A drink outside at Doen before we headed inside for some warmth and dinner.

Day #3 was a new experience for all!  First up, we needed a late breakfast/early lunch spot.  We stumbled upon a place in the Grote Markt called “De Zwarte Ruiter” randomly, and it was fantastic!  They have lots of great lunch options that are fresh and delicious.

Next we got on a train for Rotterdam, a nearby city, where we would catch a bus to a place called Kinderdijk.  The journey was a little long using public transportation (with fewer people, it’s only an hour drive), but it was well worth the ride!  Kinderdijk is a quaint village that is home to numerous traditional Dutch windmills, historically used for the movement of water as a significant portion of The Netherlands is below sea-level.  The park containing the windmills was beautiful (and we had lovely weather to match), and it was quite the sight to see.

The ladies getting a quick shot of the windmills.

A pause for BC’s photo shoot! 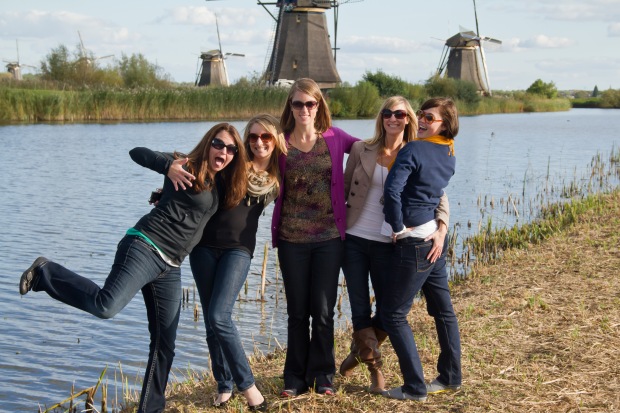 Then it was our turn! 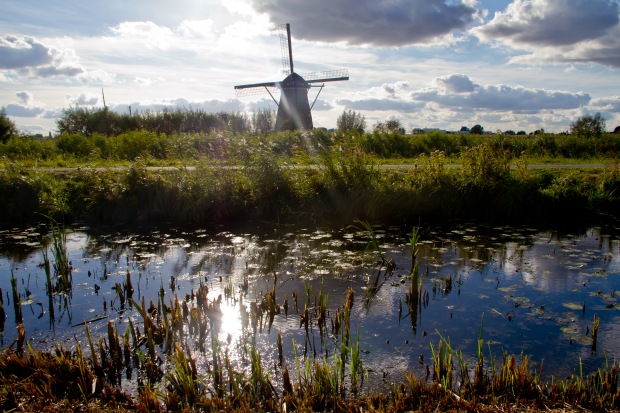 Ok, this is my last one here – check out Facebook for tons of photos of windmills!

Day #4 was an early start, as the girls and I were heading to Amsterdam for the day.  It’s only a 40-minute train ride, but we wanted to be there early to get the most out of the day.  We checked into the hotel and then headed straight to the next canal boat tour.  I think this is a great way to see all of the city sights and learn a lot about them at the same time (especially given the beautiful weather).  (Since I’ve done the tour before, I was mostly in it for the photos!) 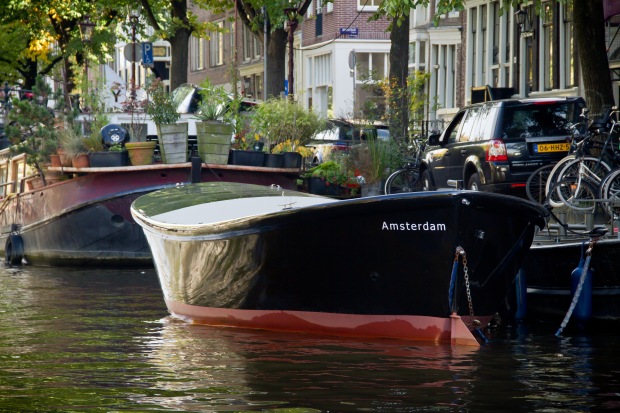 A look inside the tour boat.

Next, we wandered down to the Museumplein for a few shots with the “I amsterdam” sign.  I don’t think there is any significance behind the sign other than being a promotional and tourist spot for the city, but who doesn’t love giant letters you can climb on?! 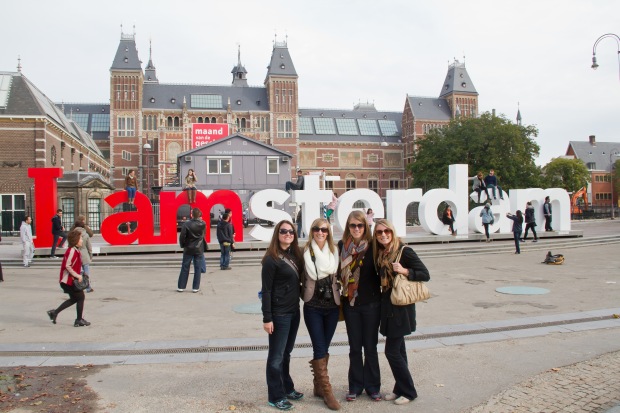 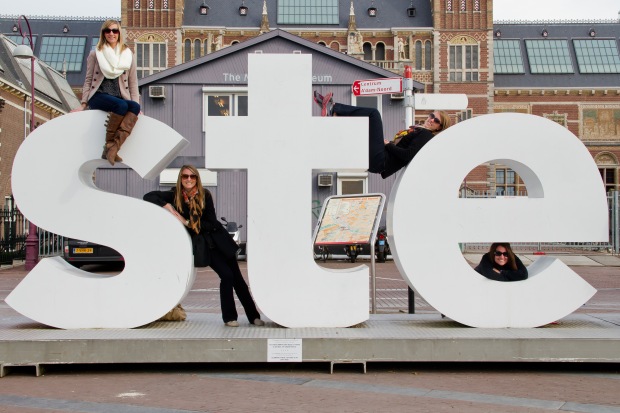 No relevance to STE, but had to zoom in so you could see the sweet poses.

From there, we headed to the famous flower market and even made a few purchases along the way in a cheese shop.  We also made a quick pit stop at the Albert Heijn (grocery store) to get a few goodies that everyone could take home to enjoy later.  We stopped in a little place for a quick lunch next to the market as well.

Some leaning canal houses spotted during our walk.

Then onward for our 3:00 reservation at the Anne Frank Huis.  Luckily, I had gotten us the tickets in advance, so we could bypass the large line to get in (something we had discovered after our last trip).  This was a very moving museum.  Just impossible to imagine being in a situation like that or imagining that these words were coming from such a young girl.  I purchased the book from the gift shop afterwards, and I’m eager to read it. 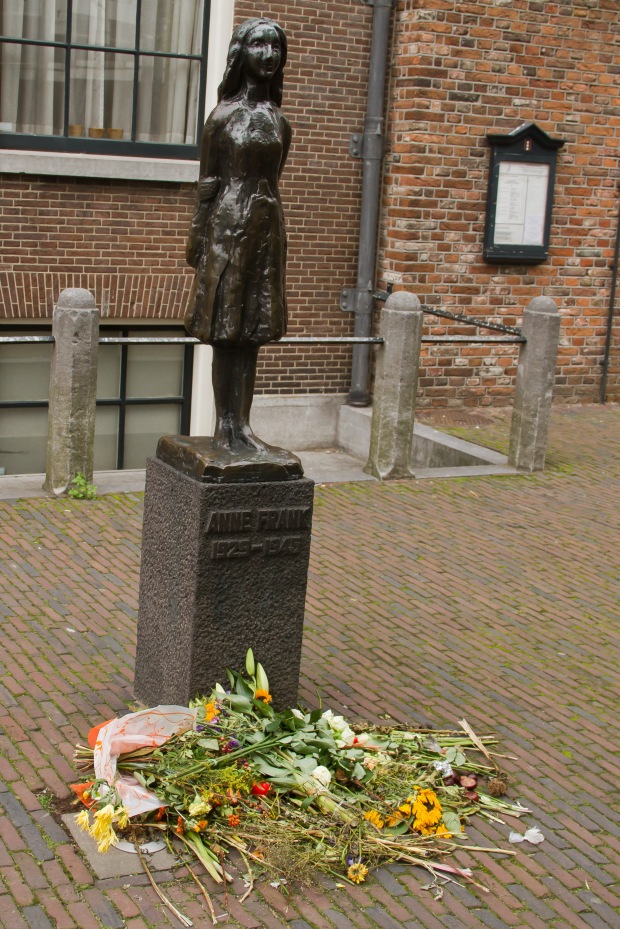 We made a very quick loop through the Red Light District, as you have to see it if you are going to go to Amsterdam, and then it was back to the hotel to unload some of our purchases and get ready for dinner.  We had a few recommendations for dinner and drinks in a nearby square (Leidseplein).  We took in some street performances from a break-dancing group while we were out in the square as well – a few of the ladies debated joining the crew or perhaps starting our own.  Dinner and drinks all turned out to be quite tasty (we even checked off a couple boxes on the foods to try list), and we called it a night…getting cozy in the European-sized hotel room!

It’s always interesting to combine two seemingly different worlds into one, but we had such a fun time showing old friends around our new home!  Thanks for coming to visit, ladies!

Also, on an unrelated note, my great-grandpa passed away on Friday at the age of 100.  It’s not an easy thing to be away from your family during a time like this, but I’m thinking of you all and celebrating the life of Grandpa Hansen here too!  Lots of love to the family, especially to my G-ma!  LOVE YOU! 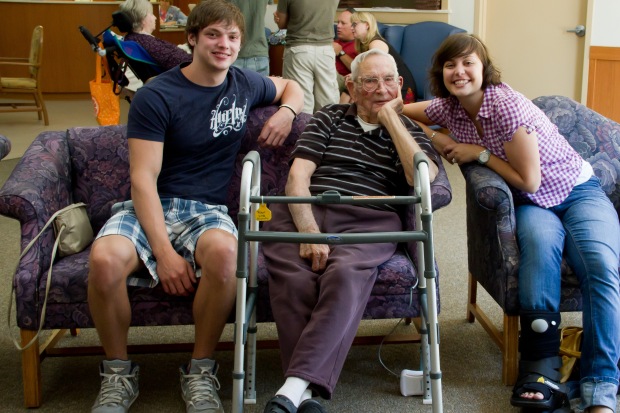 Me, my brother and grandpa before we both moved away.