As some of you might be aware, we recently ventured back to the United States for the wedding of two great peeps, Brad & Kelly.  We were looking forward to the trip for many reasons, and it definitely did not disappoint.  Unfortunately no trip to the homeland of Iowa this time around, but we will be home soon for the holidays.  (Watch for details.)

We were up early on Thursday morning to take the tram…to take the train…to the airport to fly West.  We had just enough time for a coffee and a muffin before we were off to the US (an 8 1/2 hour journey).  Of course the man in front of me thought I would enjoy the trip more if he reclined as far back as possible in his seat as soon as we took off and remained there for the duration of the flight…I wasn’t pleased about it.  But 2 movies and 3 meals/snacks later, we made it to Minneapolis.  (I even got a salad with ranch dressing on the flight – made me happy.)  This was my first trip through US customs, which was quite a bit more intense than our experiences here in The Netherlands.  There was even a dog sniffing our bags.

View of Greenland from the flight.

A quick flight later, we arrived in Kansas City.  We picked up our sweet ride (a fully loaded Dodge Charger, ha!), which only I could drive since Brad handed over his US license for a Dutch one.

Ridiculous. (Especially because I was driving.)

At this point, we had been up about 20 hours, but we knew pushing through and sleeping overnight was important.  After checking into our hotel and receiving a super cute welcome box (including a few key US items – BBQ sauce and breath mints), we wandered a few blocks down to the Power and Lights District for a quick dinner at a sports bar.  Not only were there large beers in plastic cups, large complimentary waters on ice and burgers, but also DILL PICKLES!  We made it until about 8:00/8:30 pm before we could make it no longer and called it a day. 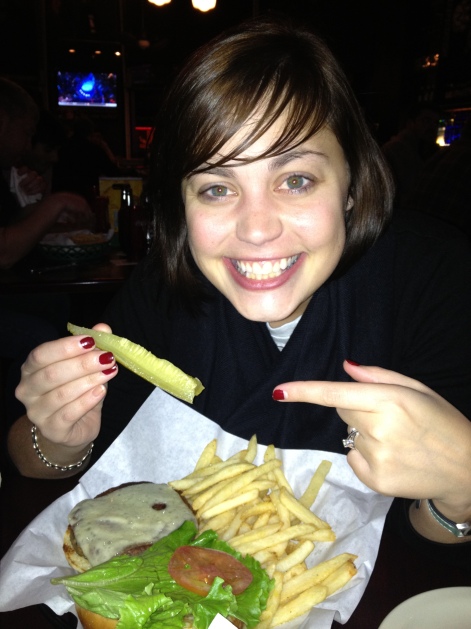 Everybody loves a good dill pickle!

Friday, we got an early start as we were wide awake by 4:30 or so.  We were pumped up for our big Super Target trip.  (There’s a bit of a side story here, as we found a random Target on the GPS and ended up in Martin City, but it was lovely none the less.)  BC started the excursion with a stop at the Starbucks inside the Target.  We then wandered through the aisles one-by-one grabbing our favorite American grocery items and a few meds.  We are very happy (although somewhat embarrassed) to have salad dressings, Mac-n-cheese, salsa, and some additional spices in our apartment now!

You may recognize some of these.

What did we have for lunch, you ask?  CHIPOTLE!  This semi-fast Mexican(ish) food chain has been atop our cravings list for basically the entire time we have been in Holland.  It did not disappoint one bit.  I’m not sure we spoke a single word during lunch, as we were too busy being in heaven.

We got back to hotel for a quick nap only to see our messages while we were out…the best man of the wedding had to cancel his trip, as his 39-wk pregnant wife was having contractions.  Definitely a bummer, as we were looking forward to seeing him, but clearly being with his wife for the birth of his child is most important!!  Luckily, we had made it back and BC was able to step in for his great friend.  He worked on a few speech notes (written on his lovely Crowne Plaza notepad), and I enjoyed a nice nap!  Then we were off to the rehearsal and the very delicious dinner/socializing to follow.

Saturday was another early morning, awake around 5:30.  We had nowhere to be until 11:00, so we enjoyed watching some American television.  Of course, you can all guess what was on the majority of the morning…here’s a hint: it’s a Saturday, in the Fall…  Correct, football junk.

Then BC was off for bbq, football and bonding with the groom and his men before wedding time.  I went off with my new friend, Margot, for a little pampering at a blow-out salon (getting our hair done for the day).  But up first, a lunch stop at Jimmy John’s…mmmm.  We then met up with some friends to watch the last 10 minutes of the ISU game.  Then the time had come to get dressed and head to the wedding.

Getting the hair ready.

The wedding was beautiful, and everyone seemed to have an amazing time!  BC successfully completed his ushering, ring holding, and recessional escorting duties.  We boarded a trolley for some celebrating and a trip to the bowling alley!  I had never seen this idea before to go bowling with the wedding party, but it was a blast!!  And it was adorable to watch the bride bowl in her gown. 🙂

Congrats to the beautiful couple! “The Becker’s”

Then on to the wedding reception to party with great friends!  They had heavy appetizers, which were da bomb!  I was a little nervous after the MOH delivered a very clever and funny speech, but BC came through also with a great speech (which he refers to as “okay”).  The groom was one of BC’s long-time friends and fraternity brothers from college, so there was a big crowd of familiar faces to boogie the night away with!  And we did. 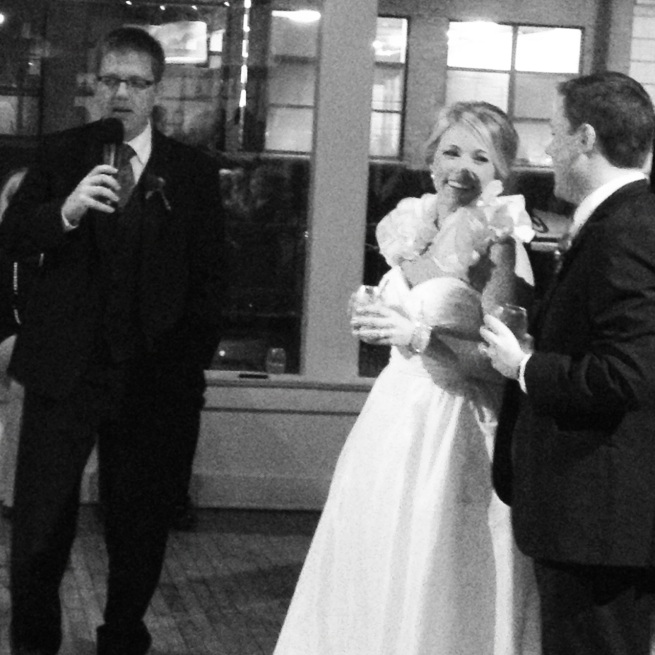 Such a schmoozer, but proud of him.

I think we started our Sunday quite a bit later…like 6:30ish.  This was about as late as we could have pushed it, however, because we had to attempt to fit the numerous bags of Target purchases into our suitcases!  A difficult task.  We got checked out and headed to the brunch hosted by the bride and groom.  It was a great spread (we even had CRISPY bacon).  However, it also meant we had to say goodbye to everyone. (Sad face.)

We weren’t about to head straight to the airport when we could squeeze in one more lunch and some NFL watching…so we made a pit stop at a Buffalo Wild Wings, naturally.  BC and I discussed what the Dutch would think of this place…it’s massive, it’s full of TV screens, people are in jerseys and quite loudly cheering, and then there’s about 25 types of chicken wings available…  I think I will be referring people there if they are going to the US purely to get opinions.

After lunch (and the Bronco’s 1st half), we headed to the rental car return and airport, knowing we would have about 2 hours to kill before the flight.  We opted for one last big, iced soda at the airport restaurant after we got checked in.  Luckily, BC had connected to wifi during this time, which allowed him to receive the email that our flight to Minneapolis had been delayed (which meant we were not going to make our flight to Amsterdam).  Our only options were: 1. Take the same exact flights tomorrow – a full 24-hr. delay or 2. Fly to Minneapolis, fly to London Heathrow, then fly to Amsterdam – putting us about 7 hours behind our original flight.

Although we had no real preference for either of these options, as they both kind of stunk, we decided it was best to still get in on Monday.  We got an abundance of new tickets/print outs from Delta, including $18/each for meals, and headed back to our little airport restaurant booth.  At this point, we were just doing everything in our power not to fall asleep during the 3 hours of additional waiting…as we really needed to sleep on the flight to return to a normal schedule.   Long story short, we made it on the flights and eventually, we made it home.

Where we spent a large amount of time in the KC airport. 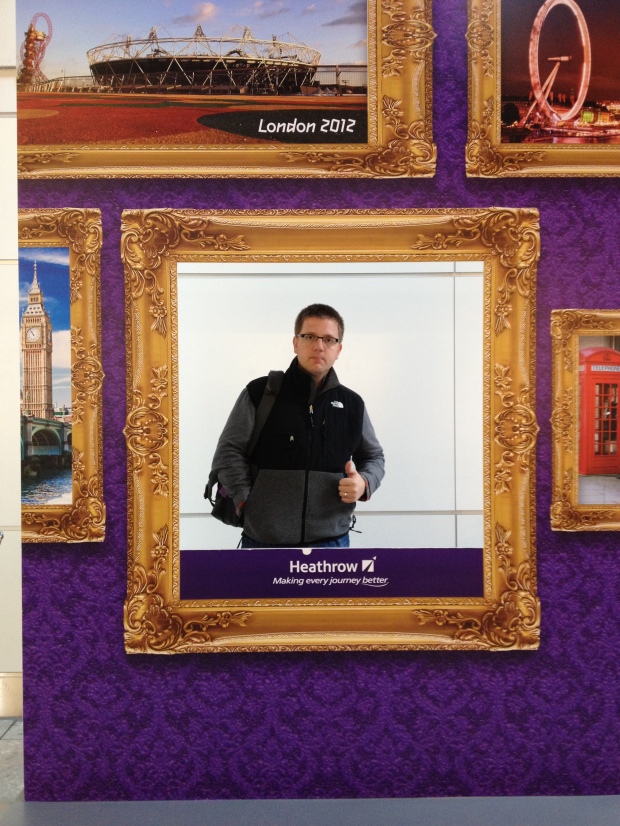 In other news – there was a US election this week.  Maybe you heard about it?  We were up at 4:00 in the morning on the 7th to watch the results at the Kurhaus Hotel on the beach at the “Who’s the President?” breakfast with many other expats and locals.  It was definitely an experience to be in a foreign country during this time.   There was a jazz band, lots of Red, White & Blue, and even some American-style pancakes.

Inside the election par-tay.

I fully believe that all people are entitled to their views and beliefs (aka, their vote) – that’s what makes our country amazing!  But I think it’s fairly safe to say that the Dutch (along with probably most Western Europeans) are very interested in our politics and typically know even more than I do.  I would say they are also generally pro-Obama.  I saw numerous signs, events, buses, and other advertisements relating to Obama-Biden 2012 in the last couple of weeks.  I did not see anything relating to Mitt Romney…sorry to his supporters.  I wholeheartedly believe that Obama has done great things for our image worldwide, and he reflects a part of America that I’m proud of.  That’s all I will say about that.  (Please don’t add a bunch of political comments to my blog – I’m glad I got to avoid some of that over the past few months by not being there.)

← Denmark – land of the lost coats
thankful, although turkey-less →

3 thoughts on “we’re coming to America…TODAY!”